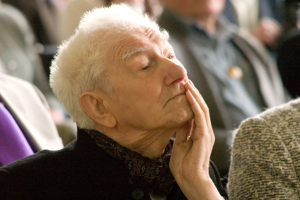 Despite a freezing cold and rainy weather, it’s worth spending a week in Riga in November. Most of all if you are arriving the 18th, day of national celebration for the 1918 Latvia’s independence from the Russian czarist empire. But this was just a “first” independence. President Karlis Ulmanis’ government turns into a dictatorship in 1934; in 1939 the Molotov-Ribbentrop pact puts Latvia under the influence of the Soviet Union, which the very next year annexes it to the Republics. In 1941 Germany invades the USSR, which will retake the helm of Latvia only at the end of World War II, keeping it until 1991 when, after the fall of Wall, Riga will host the celebrations for a “second” independence. These are the only bites of history needed to fully relish what will predictably have been standing as the most significant performance out the Baltic Drama Festival 2011, Ziedonis and the Universe by Alvis Hermanis, produced and hosted by New Riga Theatre.

Hermanis’ work fills the stalls and drags the audience through a three-minute standing ovation with an absolutely personal and genial portrait of Imants Ziedonis, the most important Latvian high-brow of the Twentieth Century. Born in a fishermen’s village, one degree in filology at Riga University and one in advanced literature in Moscow, he publishes his first collection of poetry, Sand of Earth and Dreams in 1961. Further successful collections, especially Motorcycle (1965) and I Go Into Myself (1968) make him also a way to prose and he will be soon nominated President of the Writers’ Union and of Latvian Culture Foundation. Ziedonis’ special ability to stay perfectly in the middle of a compromise with the Soviet government is a unique characteristic. On one hand the direction of cultural activities for the State, on the other a thin operation of critical alignment affirmed through symbolic acts against the regime itself: an environmentalist association for the “liberation of trees from the bushes” and a country house hand-built in the wilderness as an example of actual “private property” in the pre-Perestroika USSR. The rest of his thought is readable in his tenacious verses, a powerful poetry able to move the consciousnesses and in the same time to soften them up with almost pastoral images, somewhere between Withman and Tolstoj.

Hermanis writes on stage a long and agile team-work starting form Ziedonis poems, from the book to him dedicated by Nora Ikstena and from the interviews collected by Māra Zālīte. Undergoing a total and yet discrete direction, the partition in short chapters (each announced by titles such as Ziedonis and the Death, Ziedonis and the Concept of National Identity, Ziedonis at the Barber Shop etc.) completely reshapes the conventional narrative scheme into a conversation between the main character and his own subconscious. This simple and schematic structure revives in the very concept of acting: in the opening scene, the actors sitting in circle, a bushy gray wig (an unmistakable feature, according to the photos) switches from one head to the other, “possessing” the spoken word of whom wears it. Thus a brief and fragmented inventory of the poet is made out of amazing images, laconic aphorisms but also nursery rhymes and dirty jokes. Here comes the ironic moral which confuses good signs and bad signs: the strength of an intellectual thought in a modern society is evident as good as that very society’s fragility an malleability.

With no other features added – which could be move the whole thing into a basic caricature – Ziedonis’ wig is enough to make a proper national icon alive. And here comes Hermanis’ flash of genius: the main question is whether a myth able to give the tone to the thought of an entire nation can also tells its history. The challenge of such a imperious and thin dramaturgy is just to understand where a national identity establishes itself: in a pile of poetry and essays books? In a chat between intellectuals? In a nursery-rhyme? The answer “blows in the wind” and tells about the importance of being universal. And the poetry becomes universal by using a symbolic code, simple and complex at the same time: the silent donkey as a symbol of tolerance and stupidity but also an alternative to the unusable motorcycle, hanging from the ceiling as symbol of punishment and lost revolutionary power. But the real “eureka moment” includes the audience. In the ending part, which points out more political and national themes, the hall is prey to a crucial attention, a secret and silent complicity which closes the circle. And a foreign spectator can just be there and testify, being not part of a real involvement.

A native colleague explained that the peculiarity of Latvian theatre is the lack of a proper social theatre, rather replaced by the ability to compress the meaning of a common discourse in a metaphorical key. We would reply that such a performance affirms this statement and in the same time it denies it: between symbols and concepts, in the ironic and paradoxical actions of a cartoon-Ziedonis hides the urgent whisper of a country which has been a “no man’s land” for such a long time to be now still in search of a personal open language. But isn’t a social theater made out of this? 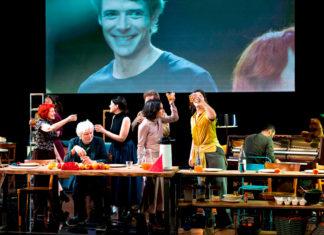 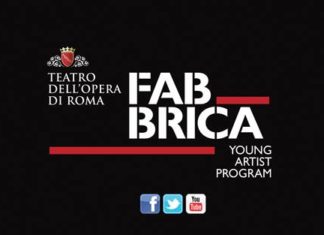