[leggi l’articolo in italiano – read the article in Italian]

Belgium. A country of clichés and good purpose, a country where ancient traditions dig a path to their contemporary heritage, to manage being European and Belgian, at the same time. Nestled between different and equally dominant cultures, urged by nationalistic shoves and a nationalism always yet to come, the country is in search of a way out of the motif of its own recent evolution. This is what Troubleyn/Jan Fabre evokes with Belgian Rules / Belgium Rules, a new creation that had its world premier at the Teatro Politeama, in the frame of the Napoli Teatro Festival 2017.

In trying to paint such an affresco of contemporary Belgium, which is the tangible element defining this artist as a heir of that specific cultural model? The general feeling is that, if one replaced those clichés with others of different origin, the statement would anyway crystallize in a list of virtues and lacks: every citizen might pay his/her country back in the same coin.

Fabre focuses on the false folklore using the – almost normalised – means of his theatre-making craft, he turns every homage in its opposite, underlining the most evident features of his homeland: punch drunk with beer, packed by pigeons, overwhelmed by bureaucracy, rapidly losing any sense of the sacred, any magnificent actual representation. Thus, theatre is the ultimate and primary tool to rephrase the context, when any judgment had it blown off. That’s how Fabre lets out – and takes in – intense and vibrant images, how he trades emotional healing with the audience, how he lights incenses and aromas in a slow exhalation; all is framed in a vivid link between the bodies and the light that embraces them.

Art’s vocation (but also evocation) weaves a thread into every scene, from the piles of materials that feed Belgian imagery from three different cultures (Walloon, Flemish, German), to tribal dances performed by porcupines and pigeons; the Passion of the Christ takes place on a cross made of beer cases and a taste of circus characterizes the whole piece.

Every topic is engraved in a subtle sensuality, halfway between opacity and vivid colours, where classical mingles up with dance music and with hymns composed by Raymond van het Groenwould. Dark and bright, elegant and vulgar, blooming and macabre images coexist: the Fabre-like aesthetics gives nothing up of its most classical emblems, that special canon dragged “at the borders of consciousness” and defined as “freedom free of any moral”. Thus, what it must be there is also that kind of repetition already seen in Mount Olympus or The Power of Theatrical Madness: exhausted is the performer, as well as the information that he brings, as if the ultimate truth should be found at the bottom of the fatigue, under the form of pure sweat. And yet, this time – perhaps because of an exaggerated length – all resembles a mere and predictable proof of concept, hard to grasp in its deep motives.

The rules. Fabre finds a surreal legislation, that the performers spell while running in place, carrying a skeleton on the back; it is focused on the irony behind certain obligations, stinging and taken to extremes, and yet necessary in order to claim oneself Belgian. In the final scene, the same obligations transform into norms that go beyond Belgian scenario, a possibility for the whole human community to have back a world without wars, ruled by Beauty, with no social divide. In many other moralizing requests, someone might find something ironic, like in the dance of the red-yellow-black flag twirlers, that by the way doesn’t seem to convey any irony.

And yet, in one of the most successful theoretical insights, one performer had spelled the unavoidable: “Enjoy the beauty of cruelty and the cruelty of beauty”, fulfilling the fundamental core of Johan de Boose’s dramaturgy. It’s about finding the tragic intensity of comedy, that goes beyond the borders of sentimental recognizability and mix them with each other until they are impossible to separate: tragedy and comedy eventually melted in one choir.
Simone Nebbia [translated by Sergio Lo Gatto] [leggi l’articolo in italiano – read the article in italian] 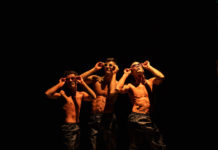 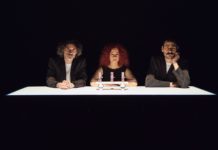 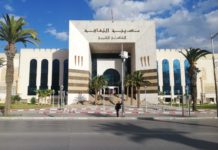 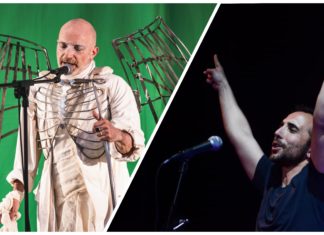 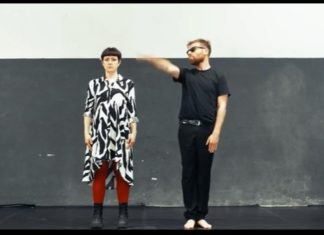 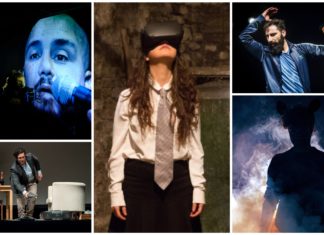 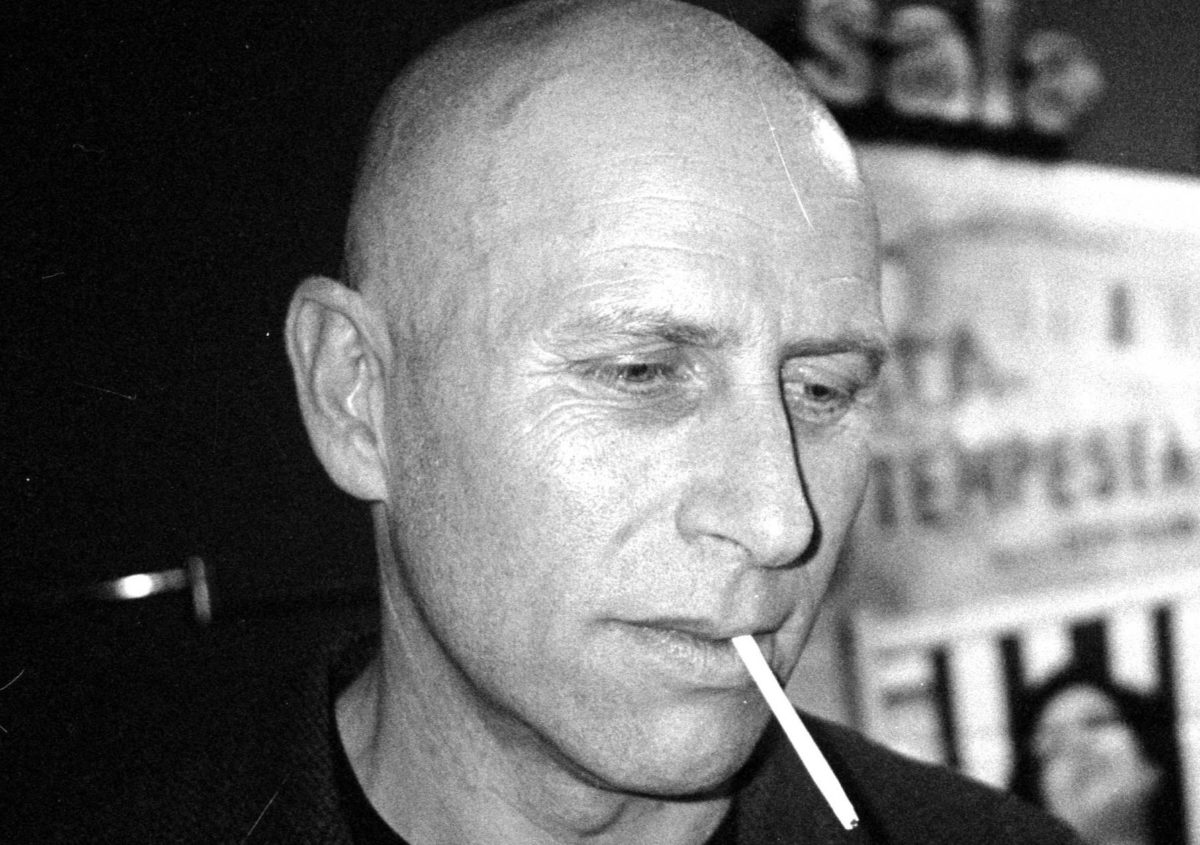 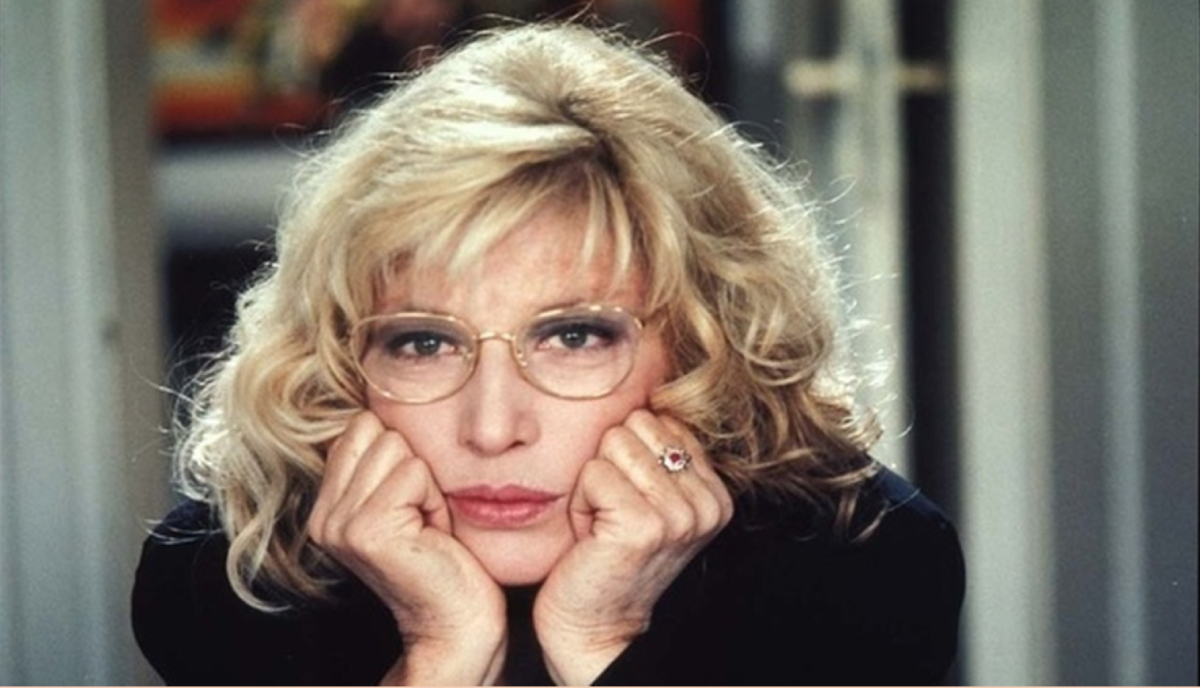